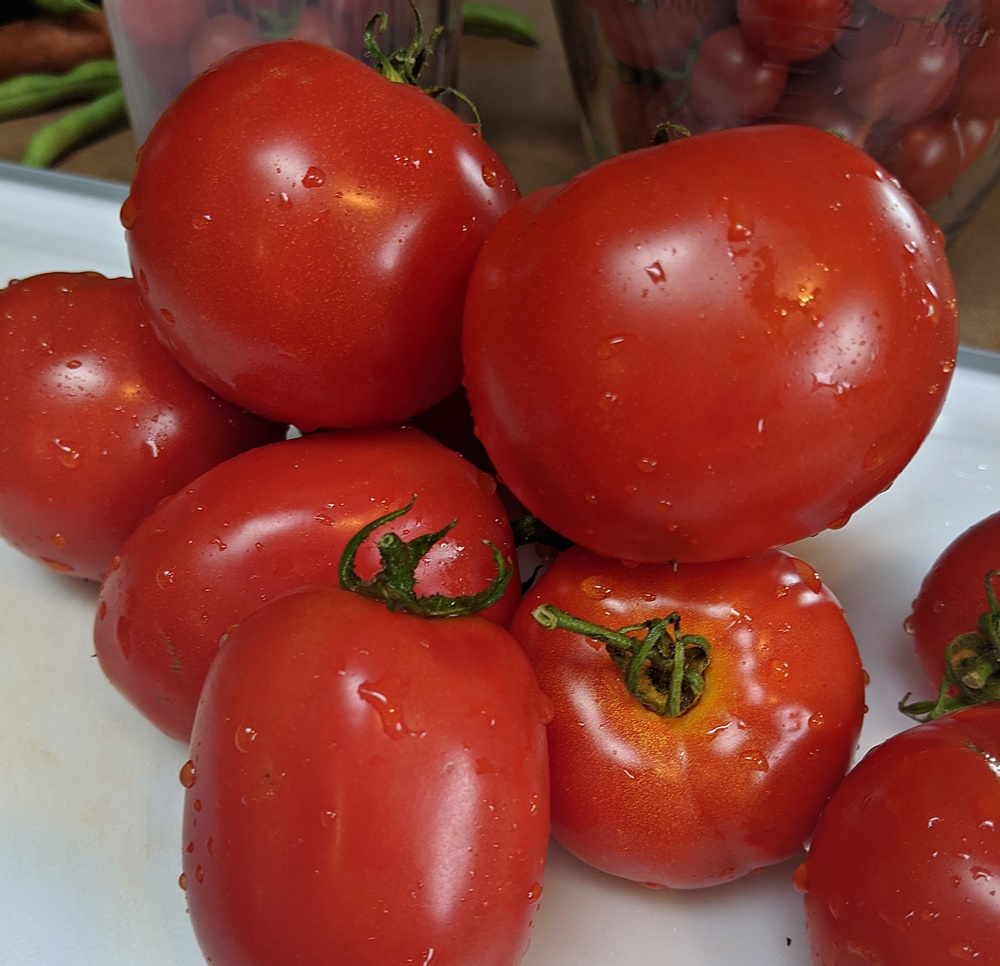 I actually ended up with a decent crop of tomatoes this year even though three of my plants didn’t produce much of anything at all. It may have something to do with me not properly caring for the two in pots and the other just never took off. It only ended up being about a foot and a half tall. Not sure what happened with him, he was in the same bed as the others.

I didn’t think I was going to get enough tomatoes for spaghetti sauce so decided to can diced tomatoes. I really don’t like canning whole, halves or quarters because I have to cut them down later anyway when I use them so why not dice them up right from the start?

I honestly couldn’t find any directions specifically for diced tomatoes. Wholes, halves or crushed, yeah, there were plenty. But not diced. It’s not like you really need a “recipe” for them but I wanted some sort of guideline so I used one for quartered. It’s all basically the same anyway. You peel and seed the tomatoes, cut them up, put them in a jar and process.

I have no idea how many pounds of tomatoes I had and didn’t measure a thing. I just took what tomatoes I had and chopped them up and threw them in whatever jars I had available. Sometimes you can do things without having precise measurements.

Step 1: Start a large pot of water boiling on the stovetop for the tomatoes and your large canning pot for processing the jars. Prepare jars and lids by cleaning and sterilizing.

Step 2: Fill a large bowl with ice and cold water.

Step 3: Wash the tomatoes and carefully cut an X in the bottom of each tomato. There are actually a few other ways to prepare the tomatoes but this happens to be the one I used this time.

Step 4: Carefully place tomatoes, a few at a time, in the pot of boiling water. I like to lower the tomatoes into the water using a spider or large spoon to keep from getting splashed and burned by the boiling water.

Step 5: Let the tomatoes boil for about 30 seconds to 1 minute. As soon as you see skin starting to peel away from the tomato pull it out and immediately dunk it into the ice water bath. You may find you’ll need to add more ice periodically if you have a ton of tomatoes and the ice starts melting away. It’s important to cool that tomato down as quickly as possible so it doesn’t cook and get too soft. It’s a pain to seed and chop later if they are too soft. Let the tomatoes cool down in the water for another minute or two. I like to use the time to add more tomatoes to the boiling water. 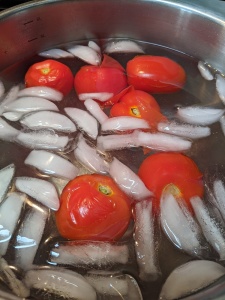 Step 6: Remove tomatoes from ice bath and set aside. Continue this process until all of your tomatoes are done.

Step 7: Remove skins from tomatoes. You should be able to see corners of skin peeling away from your tomatoes. Carefully pull the skin away and set aside.

Step 8: Quarter the tomatoes and then core and pull out the seeds. Now you can skip this step if you don’t mind seeds, but I really don’t like a lot of seeds in my tomatoes. I use a melon baller to scoop the seeds and cores out of mine.

Step 9: Cut tomatoes into small dice. The size is your preference. I like petite diced so cut mine up pretty small, about 1/4 or so. 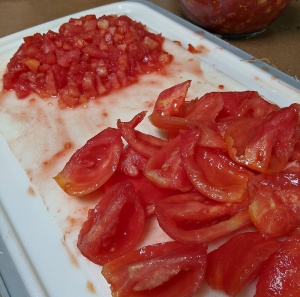 Step 10: Once you have your tomatoes diced with jars and lids sanitized place lemon juice in the bottom of each jar. The lemon juice will help with the necessary acidity content.

If you want to add salt this would be a good place to add it as well. 1 teaspoon for quart jars and 1/2 teaspoon for pints. 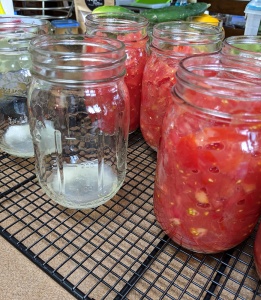 Step 11: Fill a small pot with water and bring to a boil. Fill jars with diced tomatoes leaving about 1 inch headspace. Carefully ladle boiling water over tomatoes leaving 1/2 headspace. Headspace is the empty area left between the food and the lid. You’ll need this space to form a vacuum so the lids are sealed tightly.

Step 12: Wipe the rims of the jars with a wet cloth. You don’t want anything on the rims which will prevent a good tight seal. Place lids and screw tops on jars and tighten.

Step 13: Place jars on the canning rack and carefully lower it into the boiling water. Cover and let process for 40 minutes.

Step 14: Lift canning rack out of water and using your jar tongs pull the jars out and place on a towel or cookie rack. Let sit until completely cooled down. You should start hearing “pops” as the lids contract. Once the jars are cool use your fingertips to lightly feel the middle of the lid, you should find that the lid has been pushed in slightly in the middle. If you feel a bit of “give” and it pops right back up then the jar didn’t seal correctly.

Step 15: If you find yourself with a couple of jars that didn’t seal properly there are a couple of things you can do. Put the jars in the refrigerator and make sure you use them soon. A week but no more than two should be okay. You can also reprocess the jars if there are more than a couple.

Pull off the lids and toss the flat lid, wash and sterilize the screw caps and NEW lids. DO NOT use the same lids. Empty the jars to clean and sterilize again.

Follow the same steps as above for filling the jars. Don’t forget the lemon juice and salt.

Make sure that the rim of each jar is completely wiped off and clean. That may have been why they didn’t seal properly the first time. I like running a damp cloth around the top of the rim a couple of times and then around the sides where the screw lid fits just to make sure I don’t have anything hampering the seal.

I don’t really have a recipe so can’t share that with you. Hopefully in time I’ll come up with something. I cook by throwing things together and rarely measure anything so it makes it hard to share. My kids absolutely hate it and are on my case all the time to get my recipes written down. Not to mention fix the ones that are because I’ve tweaked them all a bit and they get so frustrated when their dish doesn’t taste anything like mine. I ask them if they added “this ingredient” or “did that certain thing” and they tell me “it wasn’t in the recipe!”  Ooops.  Does anyone else have that same problem?