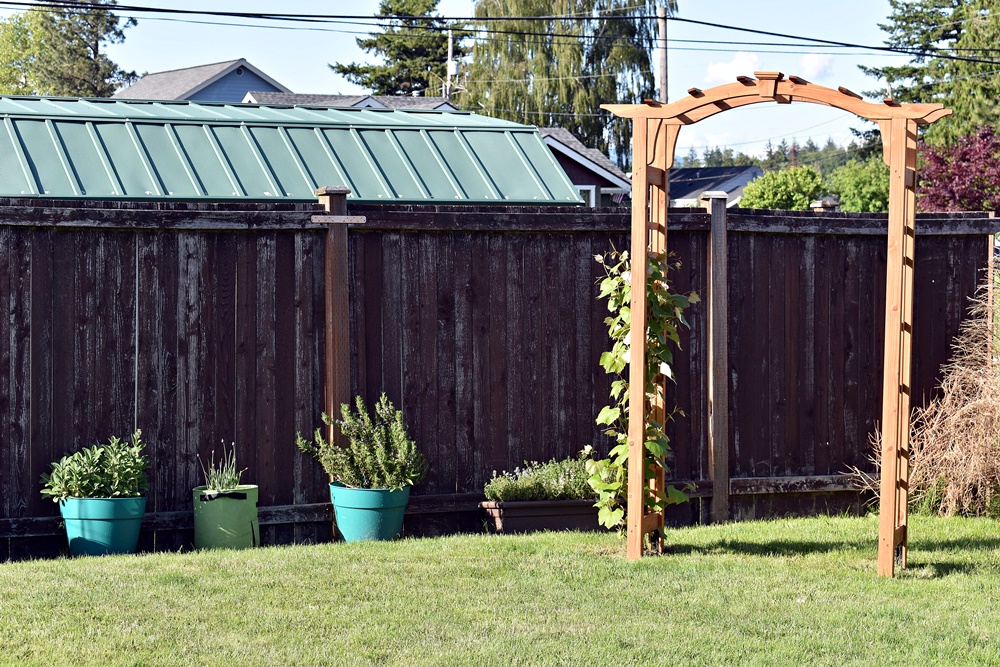 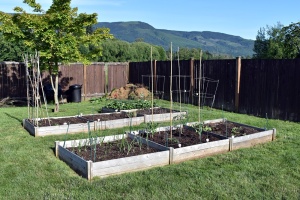 It’s been about 2 1/2 weeks since I planted and this last week really started showing a difference. I took down the walls o’ water because the tomatoes were reaching the top and touching the sides of the walls. I figured they were established enough at this point and the evenings weren’t quite as cool any more so away they went. I added support stakes and cages as well and a little pruning of the lower branches. Some were starting to form flowers so I pinched those off as well to give the plant a bit more time to grow. I want to make sure I have great tomatoes again this year by keeping up with the pruning. I learned my first year that it is extremely important to get rid of useless branches. 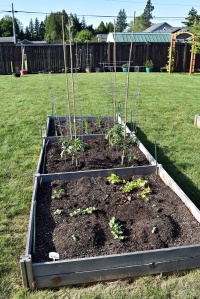 The poor kale and lettuce is a mess thanks to the dog running through the beds, but what can you do other than putting up some sort of fencing and I hate trying to weed and stuff around that. I did that last year, what a pain. We just need to continue training him that the garden is not a good spot to dig and play. I have a few cucumbers popping up and the radishes are going crazy. 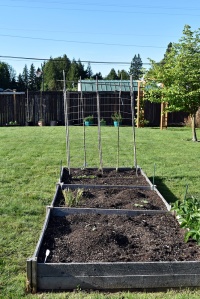 The beans have even started popping out their little heads. Last year it seemed to take forever and they looked awful all year. So far these are nice and pretty. Hopefully I’ll have a better crop this year than last. The pumpkin and squash are also showing. Except for one zucchini mound. Not a single sprout yet so I decided I had better just pop in a few more seeds just in case. 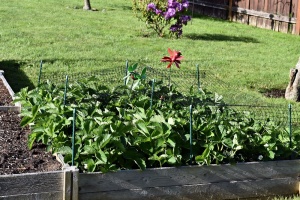 The strawberries have had flowers for a while now and I noticed a few little berries starting to form. The plants really looked good this morning when I watered and I can’t wait for fresh strawberries. My grandson loves his strawberries and strawberry jam so I hope we have enough to make at least one batch of jam. If not I’ll hit up the local fruit stands and get some of theirs. 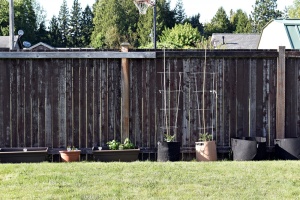 This side of the fence gets tons of sun so that’s where I grow my herbs. This year I had two extra tomato starts and decided to put them in 7 gallon fabric grow bags. They were doing great even with the cool evenings. Those grow bags must have kept the dirt warm and insulated similar to what the walls o’ water did in the garden. I also added two large, 20 gallon, fabric grow bags this year for potatoes. The 7 gallon one I used last year was okay but it didn’t produce a lot of potatoes. I’m trying reds and russets and so far the reds are showing a few leaves, the russets not so much. But they didn’t have really well-formed eyes so maybe it’ll take a bit more time. I don’t know enough about potatoes and this is only my second year trying this. For herbs we have oregano, Thai Basil, Italian Basil, cilantro, thyme, rosemary, sage, and chives. I had to break up the large chive in the garden and dole it out to a few people. It was taking over the garden. 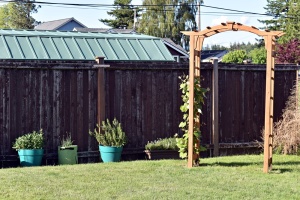 I finally found and put up a grape arbor for my Concord grape. My sister had one forever and then decided to have it all chopped down to put up wisteria instead several years ago. My brother-in-law took the dried out branches and threw a few in water to see what they would do. He must have ended up with a dozen buckets of grapevines growing. I got mine from him when we moved in here three years ago. The first year it stayed in it’s pot and last year I finally planted it but didn’t have a trellis or arbor set up yet. Fortunately they seem to be extremely hardy plants and it never died due to the poor treatment I gave it. That grape has been growing like wildfire since the arbor was put up. It’s like he’s saying “I’m free! I can move now”. There are several little grape clusters growing and I can’t wait to see if we finally get some grapes this year.

I love watching the progress my garden makes each week. It seems like magic some days. One day the plant will be teeny weeny and the next it has grown three inches.