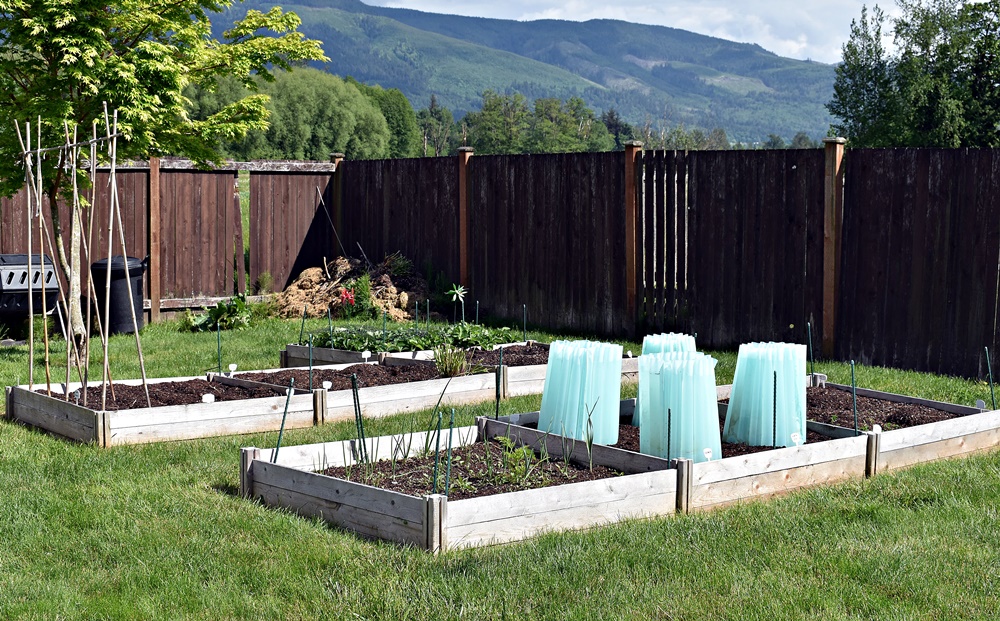 It’s that time of year again! I spent Mother’s Day weekend cleaning up the beds, weeding, adding dirt and planting. It was pretty warm for a May afternoon and the garden was a hot mess but it needed to get done if I wanted a garden at all this year. I didn’t take care of it at all last fall so had a lot of work to do in it before I could plant anything. One of those lessons learned, make sure you prep your garden for winter. Oh, I had good intentions but lost all enthusiasm as the weather started getting more wet and cold.

With everything that is going on right now it seems everyone wants to start a garden so I had a hard time finding some decent starts or at least starts that I wanted. I noticed in my area here in the PNW that many people were planting way too early and couldn’t figure out why their cucumbers and tomatoes weren’t doing very well. It was a very popular question in a gardening group I belong to, “what’s wrong with my tomatoes?”  Umm, if they aren’t in a greenhouse or aren’t protected somehow then it’s a bit too cool for them. Makes me wonder how many of those people went back and bought more starts later because they were afraid their’s weren’t going to survive or produce. 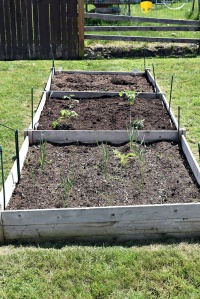 Onions and garlic in front, tomatoes in the middle and kale, lettuce and cucumber in the back bed.

I did start with some onions and garlic in April, as well as some kale and lettuce. The onions and garlic were starts and the kale and lettuce from seed. Most of the onions seemed to have made it through and the garlic is looking pretty good. I didn’t do but 5 garlic starts so I’m not going to get anything, but it was my first time with garlic so wanted to make sure I did it right. I want to try planting this fall so I have more garlic next year. Once again one of those good intentions I had last year but then didn’t follow through. I’m not at all good with the fall and overwintering part of gardening.

The seeds took quite a while to germinate and are only now really starting to grow. Guess I was a bit too impatient as well even though every gardening book or article I read for this area said lettuce and kale can be started early. Now I know, don’t do it! Maybe if I had used starts it would have worked better. I’m thinking of investing in a small greenhouse next year so I can start my own seedlings.

Even though Mother’s Day weekend was in the 80’s temp wise the next week wasn’t so pleasant. Nice and rainy to make sure the seeds and starts had water but temps were in high 60’s. I’m glad I decided to put my walls ‘o water around my tomatoes to give them a bit of protection until we  had more regular warm weather.

The first year I had my garden a veteran gardener gave me one of these to try out, she swore by them. Granted we had an extremely dry and hot summer that year and my tomatoes grew into a huge jungle. I also didn’t start pruning early enough and let them get out of hand. Last year I didn’t use the walls and my tomatoes didn’t get nearly as tall and only just peeked over the top of the tomato cage. I did keep up with the pruning and I had gorgeous tomatoes but I couldn’t help but wonder if using the walls early on helped with the growth of the tomatoes that first year. We’ll see how it goes this year. So far the weather is very similar to last year so at least the growing conditions will be very similar. 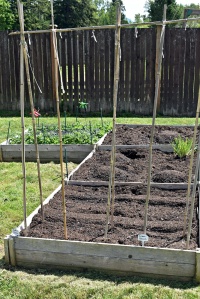 Beans, lettuce and carrots in the front bed, squash and zucchini in the middle and at the end pumpkin. Strawberries in the lone bed to the left of the pumpkin.

I looked today and the new row of lettuce I planted on Mother’s Day is really taking off. The older lettuce is finally starting to grow a bit but one of the dogs had run around in the bed early on and now I have lettuce and kale growing willy nilly. I’ll thin out the kale when they get a bit bigger and keep the two best plants. One of my cucumbers is waking up and the radish seeds I threw out there have taken off, it’s crazy how fast radish seeds germinate.

Last year I did a small 7 gallon grow bag for potatoes and was pleasantly surprised that I ended up with some cute little potatoes. This year I decided to use larger, 20 gallon, grow bags. One has red and the other russet. Seed potatoes were hard to come by and couldn’t find Yukon Gold like I really wanted. I moved the bag over to the more sunny side of the yard with the herbs. I have some basil, cilantro, thyme, sage and rosemary along the fence. I also had two extra tomato starts and threw them in my extra 7 gallon grow bags. I am honestly surprised how fast they are growing, they look bigger than the ones in my garden. I wonder if the grow bags protect the plants better than the walls o’ water.

Now it’s simply a waiting game. Wait for the seeds to sprout and keep the weeds at bay. Even in my raised beds I have the dreaded horsetail popping up. When I put in the beds I decided not to lay down fabric so it’s all natural soil under the soil I added. We have a huge field beyond the fence that’s full of horsetail so it’s hard to keep up with it in the yard.

I can’t wait to start harvesting from the garden. We used up all of the spaghetti sauce and canned tomatoes I made last year. It was so much better to have those available and know that it came straight from your garden. Made it taste better somehow.