I’m finding that it is getting more difficult every day to find something to post for #NaBloPoMo. I did find an idea somewhere to introduce your pets and I know I’ve mentioned them once or twice and have shared a picture or two of them as well. But here’s their formal introduction.

Harley – he became a part of our family in 2006 and was about 6 or 7 months at the time. He’s supposed to be a Newfoundland and Australian Shepherd mix. That is what I was told when I picked him from a local farmer that just didn’t have time for him. 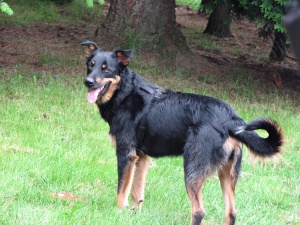 We had him home for a few days when he became really ill. Turns out he had parvo and cost me an arm and a leg to treat. Thankfully the vet took pity on me and didn’t charge me quite as much as he would have normally when he found out we had only had him for a few days, which meant he had already contracted it and there was nothing we could have done to prevent it. I’m glad he got it with us because when his previous owner found out about it the asked why we didn’t just put him down. What!? Really?

He can be a real pain in the neck sometimes and a few times my daughter has wanted to strangle him. These were supposed to be some Scotcheroos she was going to take to work one day. Well, she left them on the counter to cool and we went off to do something. This is what we found when we came back. Yes, I know, chocolate is bad for dogs but he has an iron stomach and chocolate has never, ever bothered him.

One Christmas he decided he needed to get into several presents. I had two boxes of chocolate covered cherries wrapped in wrapping paper and then wrapped in a cardboard box to mail to my dad for Christmas. I came home from work and the box was chewed up, the chocolate covered cherry boxes were empty and not ONE piece of candy anywhere. He never got sick. We were waiting and watching.

He’s getting to be such an old man now and I’m not sure how much longer he will be with us. There are days he can barely walk from arthritis. But he keeps hanging on and wants to play, he just can’t. We’ve had plenty of adventures with this guy and he’ll never be forgotten. 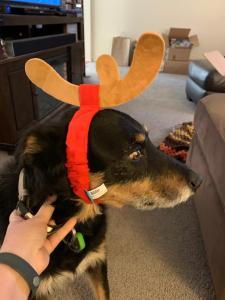 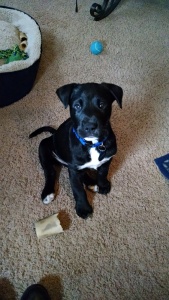 My son was living with me when he got his dog Hudson. He is a pitbull and black lab mix and is the sweetest most gentle dog you’ll ever see. I fell in love with his block headed face as soon as I met him and that hasn’t changed.

My grandson absolutely adores him. Hudson will just lie on the floor and Cade will drape himself all over him and Hudson just puts up with it. 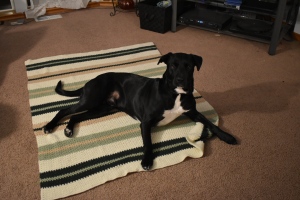 He does like to think he’s a lap dog too. Give him a chance and he’s in your lap cuddling with you. I can’t say I complain too much about it because I love the cuddles.

Yep, there is a theme with names and our dogs it seems. We purposely name them something that starts with an H. No reason other than we named our first dog Harley and my son thought it would be fun to name them all that way. It’s not easy trying to find just the right name. We had a heck of a time with Hunter. Hudson was real quick. His blocky face reminded us of Doc Hudson in Cars. 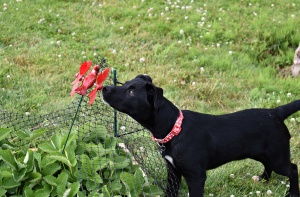 Hunter was adopted from our local Alternative Humane Society and is a Border Collie and Black Lab mix. He is very high energy and needs constant entertainment. We’re not quite as good at it as we should be and need to get better.

All of the dogs get along pretty well but it definitely is a mad house when we have them all together. Good thing I have a large house and big back yard. Plenty of room for them to run around.

We have some new kittens and a senior cat running around as well but I think I’ll save the for another day.

Australian Traveller that loves to "Roam" our globe, creator of ENDLESSROAMING.COM sharing the experience through word and photography. Currently residing in my home of Newtown Sydney but hope to be back on the road late 2020. Feedback / questions are more than welcome, happy travels

Love is in the yarn!