So this is my second year at gardening. Hopefully I learned a few things from my experience last year.

We were definitely overcrowded last year so to remedy that I added an extra 4 x 12 raised bed. We’ve even gotten the removal of the grass down pat. Once we figured out a system it didn’t take long.

We picked up a garden journal and started planning pretty early by sketching out the garden and placement of the plants. We decided on pretty much the same things as last year: beans, carrots, onions, tomatoes, zucchini, yellow squash, cucumbers, lettuce and kale. We did add broccoli, spinach, spaghetti squash and pumpkins.

BUT…a lesson learned this year is we need to plan even better and use  better compost. The compost we had wasn’t terrible but it was more wood than dirt. We are still working on our own compost and trying to figure out the right ratios of brown and green stuff. Right now it is still more woody than I’d like. Maybe next season.

May 11th – The beginning. It looks so empty.

We had everything in the ground on May 11th and everything looked so barren and lonely. I thought it was going to take forever for the seeds to start sprouting and even now after a month and a half many of the seeds didn’t come up. Part of it was because the dogs ran through it and scattered the seeds and it also didn’t help that the neighbor’s cat decided the garden made a great litter box. Ugh! I ended up putting netting around the beds and hoped that would at least deter them a bit.

I was getting a bit worried though, three weeks after planting we still didn’t have anything. The beans weren’t sprouting, the lettuce wasn’t coming up and neither were the carrots. The kale however was doing great. Lesson number two for next year — follow the planting guides for our area. We were too early for the beans and too late for the broccoli. The broccoli starting forming crowns pretty quickly but they were small and not fully formed before going to seed. Please don’t judge…we did a ton of research but I guess there was only so much we could stuff and retain. That’s why making notes as we go along and figure out what we did wrong and what we did right is so important.

June 25th – one and a half months later and what a difference.

Here we are a month and a half later and how everything has changed. The cucumbers are starting to blossom and I harvested our first zucchini already.

I bought some pyramid style cages for the squash and cucumbers to climb up instead of spreading out on the ground and it really seems to be working great. They are climbing like mad and it’s a lot easier to water because it’s pretty open at ground level. 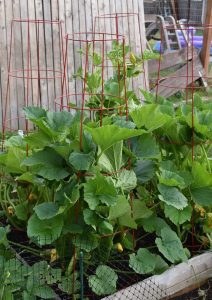 Look at that spaghetti squash climb

Another lesson from last year — keep up with the tomato pruning. My tomatoes were a jungle last year and although I had tons of fruit, they just never got very big. So I am working at staking them and keeping them pruned as much as possible. We have a ton of flowers already and I saw few tomatoes forming so it won’t be long now. 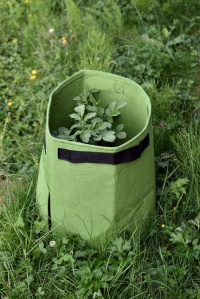 Something new I’m trying this year is growing potatoes in a container bag. The bags I picked up were a lot smaller than I expected so I don’t think I’ll get many spuds but that’s okay because it’s an experiment this year. Depending on how it works out I’ll try a few different types next year and maybe get bigger containers.

I can’t wait to see what happens in the next few weeks.