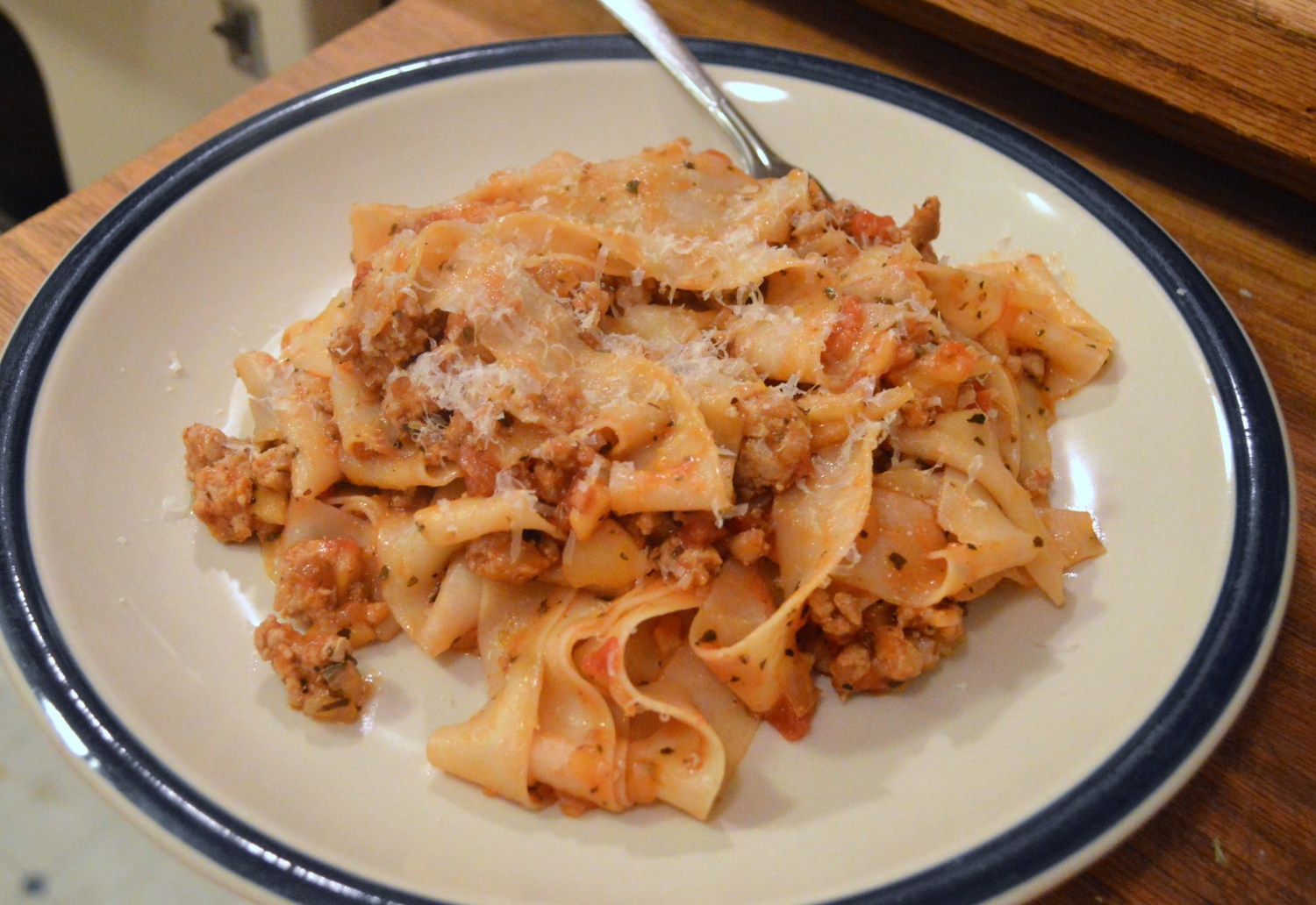 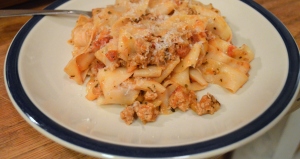 What do you do with extra apples, fresh pappardelle pasta and pork sausage from your CSA box? You make this delicious pasta dish.

First you use your handy dandy little cookbook database and you see if you have any recipes for pappardelle, pork and apples. Hmmm, none there. Ok, let’s use the search function and search the web. A nice long list pops up but I found that only the first page or two had all of the elements I was looking for…pork, pasta and apple. Oh and by the way, if you are curious to what recipe software I use it’s called Cook’n by DVO. I have plans on doing a separate post on that some time in the future. 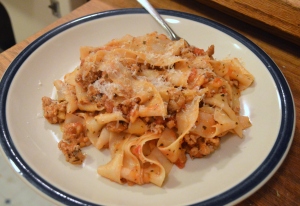 This Apple-Pork Ragu recipe called for everything I had on hand and used up some ingredients from the CSA box that I had no idea what to do with. I will admit to being somewhat hesitant at first about the combination of tomatoes, apples and pork. It honestly didn’t sound entirely appetizing but I decided to go with it. Things have surprised me in the past. This one was no different. The sweetness from the apples toned down the acidity of the canned tomatoes. I tossed the pasta with the ragu instead of ladling it on top and I think that really is the best way to go. The pasta had a nice even coating of sauce and wasn’t swimming in it.

This dish was a hit, even with my son who had it as leftovers the next day. This was just another one of those lessons you learn…don’t judge a book by it’s cover. The combination of the ingredients didn’t sound all that wonderful to me but in the end it turned out a beautifully tasting meal that will be made again. In this family, if we like it well enough to make it again then it’s a keeper. 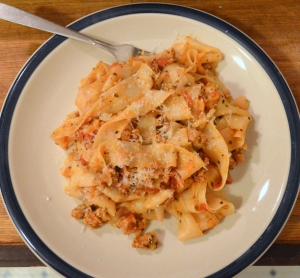 adapted from a recipe found on huffingtonpost.com

Heat the oil in a large sauté pan over medium-high heat. Add the pork and cook it until it browns, 5 to 7 minutes, breaking it into smaller pieces with a spoon. Drain and set aside.

In a large sauce pot or Dutch oven, lightly brown the bacon pieces over medium heat. Add the onions, apples and garlic and cook until the onions are translucent and apples are soft, about 5 minutes. Add the wine and simmer until the wine is reduced by three quarters.

Add the tomatoes, tomato paste, broth, and browned pork and bring to a boil. Reduce the heat and add dried basil. Simmer until the sauce has thickened somewhat, about 15 minutes.

Meanwhile, bring a large pot of salted water to a boil. Drop the papardelle in the boiling water and cook until al dente, about 3 minutes, or according to the package directions. Drain pasta and add to sausage ragu mixture, season with salt and pepper to taste. Serve with grated parmesan if desired.