I was going through old cooking and food magazines trying to clean things up a bit and came across this recipe from Cuisine at Home Magazine. I even had most of the ingredients from my CSA box a week ago that needed to be used up before picking up my new box. I used their fresh corn tortillas, Jack cheese and fresh cilantro. Already had chicken and spices so the only thing I really needed was the tomatillos and jalapeno peppers.

The recipe makes two servings. Perfect for me right now with the kids all gone. The original recipe calls for two individual baking/serving dishes but I decided to go with one dish so it ended up more like a torta. I have a nice small, 8″, stone baking dish that holds about 4 cups. Perfect size! The recipe also called for pickled onions to top it with, but I decided to make fresh pico de gallo and I think that was a better choice, well at least for me it was. 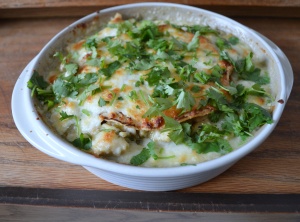 Preheat oven to 400 degrees. Spray small 8″ baking dish (holds 4 cups) with non-stick cooking spray. Boil water, broth, onion and garlic for the chicken in a saute pan over high heat. Season chicken with the oregano, salt and pepper; place in boiling liquid. Cover pan, reduce heat to medium low and simmer until chicken is cooked through, about 15 minutes Remove chicken to a plate to cool.

Add tomatillos and jalapeno to broth mixture; return to a boil over high heat and reduce to 1 cup, about 7 minutes. Mash tomatillos with a spoon or potato masher. Shred chicken with two forks once cool enough to handle. Stir chicken and the 1 tablespoon chopped cilantro back into tomatillo mixture, then remove from heat.

Brush corn tortillas with oil on both sides. Toast in oven until crisp, making sure to flip them at least once. Takes about 5-10 minutes. Combine cheeses in a bowl and sprinkle a thin layer in the bottom of the baking dish. Top cheese layer with a tortilla, about 1/3 of the chicken mixture, 1/4 of the cheese, top with tortilla. Repeat layers, ending with tortilla and remaining cheese. Bake casserole in oven until cheese melts and sauce is bubbly, about 20 minutes. Garnish with chopped cilantro and pico de gallo if desired. Makes 2 servings. 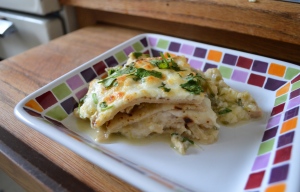 This definitely is going to be added to my Family Favorites cookbook. My son came over and had leftovers the next day and said they were so good and he could only imagine how much better it would be fresh.

I think this recipe can easily be doubled or tripled if necessary for larger families. Instead of layering one tortilla at a time all you’d need to do is use maybe 3 or 4 tortillas overlapping each layer.