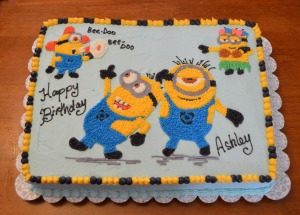 My daughter, who is 28, loves minions and really wanted a minion cake for her birthday. We discussed several options and because she’s not a fan of fondant and absolutely loves my “birthday cake frosting” I decided to go old school and pipe the minions on to a sheet cake.

My blank canvas.  The cake was actually four 9×13 rectangular cakes. One side was chocolate and the other yellow so people had a choice. A problem popped up because I wasn’t thinking very clearly and didn’t make sure the two different cakes were the same height before I started frosting. The yellow cake didn’t bake as high as the chocolate so I had to try and level it off a bit. Good thing she loves frosting because I had to patch some of the uneven surface with the frosting.

I’m going to admit that the cakes were box mixes. My daughter said she didn’t care because all she really wanted was the frosting. I usually bake them about 5 minutes less than the box calls for and they always turn out moist. I don’t add anything else to the mix, just follow the recipe on the box. Everyone is always surprised when they find out that I used a box mix saying “mine never turns out like this”. It’s called over baking.

The cast of characters. Now which ones do I want to use? I wanted them all but knew there was no way I could get them all. I decided to go with two main minions dancing and then a couple of small ones. One of her favorites is the little guy with the flashing lights that says “bee-doo, bee-doo” so he definitely had to be on there.

In progress. First I outlined the characters in the frosting with a toothpick. Yes, I free handed it. I actually do better that way. Next I outlined the images with frosting and then piped little stars in to fill in the sections.

The frosting I use is actually the Wilton frosting recipe. I just add almond extract along with vanilla extract. I think that is what gives it the little extra that everyone loves. I don’t use clear vanilla, I honestly don’t like the flavor of clear vanilla, I think it leaves a funny aftertaste to the frosting. Regular vanilla works great. If you want a snow white frosting then I’d find a different recipe.

Why Wilton? It’s the frosting I first learned to make when I started decorating cakes and my kids love it. I also think it is the best frosting to use when doing this type of cake. The stars retain their shape and it gives the characters a clean, crisp look.

Once all the figures were finished I added a border to finish it off.

A few tips when working a cake like this.

2. Make sure you start the cake a day or two prior to needing it. It is very important to lightly frost the entire cake and let it dry. This is called a crumb coat. Because I had to cut a bunch off the top it had a ton of crumbs. My first frosting layer was pretty ugly with crumbs. But after sitting overnight dried it out and when I put the next layer on it was so smooth and no crumbs to be had. Really, it’s very important to do this step no matter what shape cake you are making.

3. Make sure you have a very sturdy base under your cake board. I used a large wooden cutting board which helps stabilize the cake. If I only relied on the cake board the break between the two different cakes would have left an obvious separation in the frosting and totally ruined the cake. I left it on the cutting board while I was decorating and everything. That way I didn’t have to worry about any accidents.