You know how you have a vision of a project in your head but the actual thing doesn’t quite measure up?

Well, that seems to be my issue with this September Morning afghan. The problem lies with the color scheme I chose. This was a mystery CAL so you just had to pick the colors and hope for the best. I still like my colors, but unfortunately the sunburst or flower motif isn’t being done justice in my particular color scheme. It just doesn’t look right. Truth is the more I look at it the more I think it just doesn’t fit in with the other squares. I love the designer, don’t get me wrong, and this is a very creative and lovely square. It just doesn’t seem to mesh well with the other two which are more geometrical. 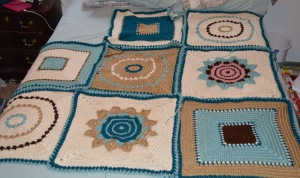 The design only calls for six squares but I like a nice big afghan to cuddle up in so decided to double the number of squares.

I also have an issue with one of the colors I chose, the light brown is really ugly when used as the major color in a square. It just throws off the whole balance of the rest of the afghan. It’s not a bad color, it just shouldn’t be used for the huge areas. As an accent color it’s perfect.

No matter how hard I’ve tried I really don’t like the look of this afghan as it is right now and probably would never use it. It doesn’t make sense to continue on with it so I decided to re-evaluate the whole project and see what I can do so I will be happy with the outcome. So that’s where the “ripp-it” it comes in. Let the frogging commence.

The first thing I decided was the sunflower/starburst motif had to go. So now I’m only going to use the two motifs, the bobble circles and the squares.

I’m also ripping out any of the squares where light brown is very prominent. It took me a couple of hours to rip apart those squares. I knew there was a big reason why I don’t weave in ends as I go! I always complain about those ends when I’m finishing a project, but this is a great example why I leave them. It’s so much easier to rip something apart if there aren’t ends weaving in and out.

Here are the little yarn balls after all that frogging. 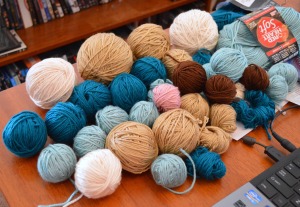 I’m hoping I will be happier working on this afghan now and maybe I’ll even get it done. There’s nothing worse than disliking a project so much that it sits for years and you dread working on it. Better to just frog the whole thing and start over with something that you love and will enjoy working on.

This is what I was left with. I think it’s looking better this way, don’t you? But I’m still not 100% sure about a couple of the squares. I will have to wait and see after I finish up the rest and see how it all works together. So no weaving in of ends yet!

Yeah, it’s a pain and I don’t even want to think of the hours I wasted making those squares just to rip them out. But in the long run, it’s really worth taking the time to make your project something you can be proud of.