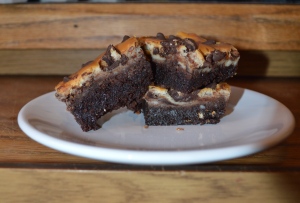 These are seriously decadent! The few weeks before St. Patrick’s Day our local grocery store started carrying Hershey’s Mint Chocolate Chips. I don’t know if it’s the same elsewhere around the country but it’s about the only time you can find them around here. So I picked up a couple of packages and a box of brownie mix, yes box brownies, I still haven’t found the right recipe for brownies.

Then I started thinking about making something for St. Patrick’s Day using the mint chips and I thought of my cream cheese marbled brownies. What if I added some Bailey’s Irish Creme to the brownies and then use the mint chocolate chips instead of regular semi-sweet. I even thought that I would color the cream cheese mixture green for the holiday. Well I never did get it done for St. Patrick’s Day but the idea still intrigued me.

The brownies were made following the package instructions and I added the Bailey’s to the cream cheese mixture instead of vanilla, and then sprinkled mint chocolate chips over the top. I only added 3 teaspoons of Bailey’s and it gave the cream cheese mixture a slight Bailey’s flavor, you can add as much or as little as you’d like. The mint chocolate chips tended to overwhelm the Bailey’s a little bit after being stored overnight.

They smelled so good baking and tasted even better, even still warm from the oven. My son couldn’t wait for me to cut into them so he could sample a piece. Well it definitely won him over and it’ll be a nice special treat now and again. They are definitely too rich to eat too big of a piece or too often, but it’s something you can pull out to impress special guests.

Beat cream cheese, sugar and Bailey’s with electric mixer on medium speed until well blended. Blend in egg. Pour over brownie mixture; cut through batter with knife for marble effect. Sprinkle with chips.

Bake at 350 degrees for 35 to 40 minutes or until cream cheese mixture is lightly browned. Cool. Cut into squares.