Is it really Friday already? Seriously, where does time go? I don’t have many finished projects this week. I’ve spent a good amount of time making jam every night. I do have a couple of hats at least.

This one is a test I did a couple of months ago but couldn’t post until the pattern had been published. It was just published in Crochetvolution so now I can share my picture. It’s called Winter Crossings Set by Dawn Friday. I used some scrap yarn I had, Impeccable by Loops and Threads and can be found at Michael’s. I tried to get a good picture of the edging which I thought turned out nice. It’s a surface crochet in yellow and reverse single crochet/crab stitch to finish it off. 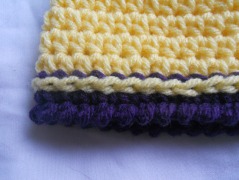 The Geez Louise hat for a cancer hat drive I’m participating in. I found this at Crochetvolution as well. I wanted to make something to donate that was a little bit different from the usual beanie type chemo cap. It’s almost turban like.

And finally for my dear Minion loving daughter! She’s crazy over the things and really wanted me to make a hat for her. I got this pattern on ETSY from Simply2Irresistible. It worked up in a couple of hours. I will admit though, for all of these hats I had to go down in hook size and in the case of the Minion I had to go down 2 hat sizes as well to get it to fit my head. I have a big gourd and I always thought I was a tight crocheter. I pretty much frogged the whole Minion hat the first time I made it, I was drowning in it. 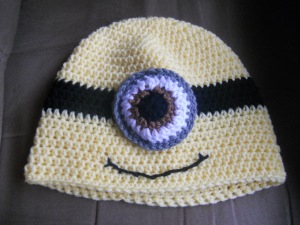 So that’s all I’ve finished this week. Guess we’ll see what next week brings. Maybe I can get some work done on my afghans!