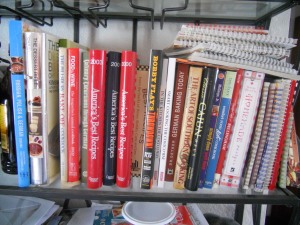 Just a handful of my over 300 cookbooks.

I was inspired by Kamisquest Cookbook Challenge.  She said that she has three shelves of cookbooks and wanted to expand her cooking skills.

Well I thought it was an absolutely brilliant idea and wanted to challenge myself as well. I have a ton of cookbooks, probably over 300 or so. I have made recipes from many of them, don’t get me wrong, they have been used. If you open that Art of Southern Cooking cookbook, you’ll definitely see that one has been used a few times.

But there are many others that I haven’t tried any recipes yet and I feel I should at least try one or two recipes out of them. I think at least one or maybe even two recipes a week to start. It’ll take me at least a year to get through them all.

The only stipulation will be it has to be a NEW recipe. It can’t be one that I’ve already tried out and is now a family favorite, of which I have a ton. I’m thinking that I would like to try one sweet and one savory from each cookbook, if they have any desserts. I know some of the small recipe booklets don’t.

Maybe this will help me to get my cookbooks reorganized as well. Once upon a time, long long ago, I had a system for keeping track of my cookbooks and recipes I wanted to try. It started out with 3×5 index cards. I would go through my new cookbook and pick out recipes that I thought the family would like and I wanted to try out. I wrote the name of the recipe at the top, then the cookbook and page number, and finally wrote out the ingredients. When I created my menu for the week I would go through my index cards and pick out different recipes and write out my grocery list from the card. Well that lasted until I had at least 4 index card boxes full of cards. Then I painstakingly transferred them all to an Access database. I have the same items in the database but also added a rating, last date made and category column. The rating was so I could keep track of whether it was a keeper or not, the date so I knew when the last time I made it, and of course the category just helped organize and search for recipes better. (Yeah, OCD much?)

I’m pretty far behind now in keeping up with my database. I have thousands of recipes listed to try out and know I will never get through them all. But if I’m looking for something specific it helps a whole heck of a lot better than flipping through each and every cookbook. Although I will admit that I still love to go through the cookbooks just so I can see pictures and drool.

So what cookbook will I choose first, I wonder.  I keep looking at the Cajun cookbook actually. I haven’t tried anything out of it and it is one of my newer cookbooks that I received in a swap a while back.

Wish me luck on my journey!