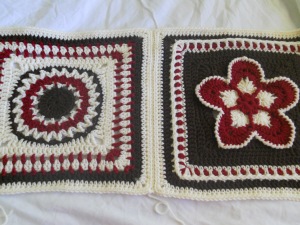 I am finally sewing my squares together for this afghan.  I’m going to be using 20 12″ squares. I have repositioned these things about a hundred times now until I was finally satisfied with the layout.  Originally I was going to keep a brown border on each square but it just didn’t look right. So I went back and added a round of hdc and a round of sc on each square and I was really pleased with how it changed the whole look of the afghan. So what do you think? The first picture is my original squares and layout. I didn’t like half of the squares so went and did a few more that I liked better. The second picture isn’t actually the current layout, but it is the same squares. I just moved it around a bit more until I was happy.  Looks so much better don’t you think?  I still haven’t quite decided on what kind of border I’m going to add.

I’m also rotating between this quilt look afghan that I’ve been working on for a year now.  I probably still have about 100-150 individual squares to make but, honestly, I’ve lost track of how many I’ve done. So I’ll just piece together until I run out. It only takes about 10 minutes or so to make one, and that’s including the weaving in of ends. Don’t think I’m going to get this one done by the end of the month though. Dang it! I wanted to submit it to the fair this year. 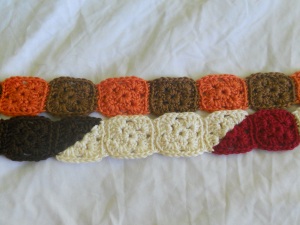