Although I’ve been doing a lot of hooking lately I don’t have very much to show for it. I did manage a few small items in between the pattern testing I’ve been doing.

This one is actually a test I did back in March. The pattern was published in May so now I can plaster pictures all over the place. The pattern can be found in Crochetvolution, a pretty nice crochet e-zine.  It is published quarterly and all patterns are free. They are usually pretty quick and easy and fun to make. This water bottle cover is from Anastacia Zittel. The only change I made was the string tie. I single crocheted a longer tie and then slip stitched back down. I then wove the tie through the loops in the cover and sewed the two ends together. Now it’s long enough to toss over my shoulder and I’m hands free! Perfect to take on a walk. 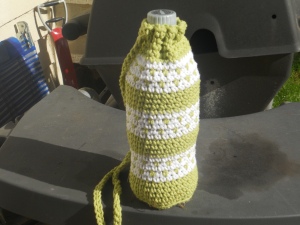 This is just another cotton market bag.  I never seem to have bags with me when I go shopping.  Even the department stores aren’t allowed to have plastic bags, so it’s pay .05 to .10 for a bag every time you go shopping or bring your own.  These bags are great because you can stuff so much in them. Love them for yarn shopping and for fresh produce. I found the pattern here at Nancy’s Crochet.

This last one was just a silly project for one of my Ravelry groups, a Yin Yang square. I used a cross stitch pattern I found on about.com.  I started with a chain of about 177 and then single crocheted 5 rows.  I also added about 5 single crochet stitches on either side of the actual image and then followed the chart from there and added 5 white rows to the top as well.  After I finished it I realized I probably should have turned the graph before starting so it would look more traditional.

I did finish up my two secret tests but we’ll have to wait for pictures of those items. Now on to this ripple afghan that has to be done by next weekend. Yikes!