So over the last several years I have packed on some major poundage.  I’ve also been trying to lose it but have not been consistent or very religious about it.  I joined Weight Watchers with a friend and lost a few pounds but then slowly starting packing it on again. Diets aren’t good for me.  I HATE diets! Tell me I can’t have something and, well, just like a kid I want it and I want it now!

Now I have a wedding to go to in July and I really would like to be able to buy a decent dress that isn’t a tent or a mu-mu. You know what I mean?  I don’t want to look like my  Great Aunt Tessie’s floral couch from the 50’s either.

The Cabbage Soup diet has been around for years and years and years. It’s nothing new, it’s just another fad. Heck, it’s not really even a diet.  You eat the soup for 7 days and follow this little plan for eating your fruits and veggies with a side of protein about mid way through.

I decided I was going to jump right on that bandwagon too. But I am not going to follow their little plan exactly.  Of course you’re going to lose 10 lbs in 7 days.  You’re not eating much of anything. The veggies in the soup are pretty much free points according to WW.  What this “diet” is doing is trying to teach you to eat better and less. Cut out processed foods etc.  So my plan is to use it as a kickstart my metabolism.  Change things up a bit. Soup for breakfast? Eh, why not?  Who says you can only have cereal or eggs for breakfast?

So I did some reading and checked out a few blogs.  I was amazed at the number of people who said the soup was bland and they had to choke it down. I found a few recipes floating around and most were pretty much the same. The only difference was some said no spices and others said add whatever spices, just try to limit the salt. I found a Cabbage Soup Diet website and decided to use their recipe.  I decided that I was going to make the soup tasty enough that I wouldn’t mind eating it for breakfast, lunch, dinner and in between meal snacks.  I have actually found it to be rather addicting and look forward to my bowl of soup!

Is this going to work? Probably not, because I simply don’t have the willpower to stick with such a strict and austere plan. But the soup is great and if I have a salad as well I think I’ll be well on the way to cleansing the toxins out of my system. Here’s my version of the recipe. You don’t have to be on a “diet” to enjoy this soup either.  The biggest thing I have left out of my recipe is the onion soup mix they recommend.  Every recipe and blog I read said stay away from added salt. Do you know how much salt is in those packets of soup?!!  Use dried or even better, fresh, herbs to flavor the soup naturally.

Directions:
Slice green onions, put in a pot on medium heat and start to sauté with cooking spray. Do this until the onions are whiter/clearer in color (about 4-6 minutes). Cut green pepper stem end off, then cut pepper in half to take out the seeds and membrane. Cut the green pepper into bite size pieces and add to pot. Add the chopped celery and carrots and saute a few more minutes. Add the cabbage, I chop it up so it’s about the same size and texture of coleslaw.  Saute until vegetables start to soften. 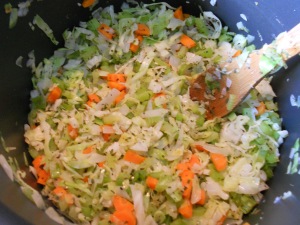 Add tomatoes, water and juice.  Add the bouillon cubes and any additional spices or herbs to flavor the soup. Cover and simmer over low heat for at least two hours.  Cool thoroughly before storing in refrigerator.

CategoriesA Little of This and A Little of That, What's Cookin'
Tagscabbage soup diet, cooking, food, recipes, weight loss